La Mortella Gardens were created in 1958 by Lady Susana Walton , the wife of Argentine origin of the English composer Sir William Walton . The gardens are located on the promontory of Zaro in the municipality of Forio on the island of Ischia. 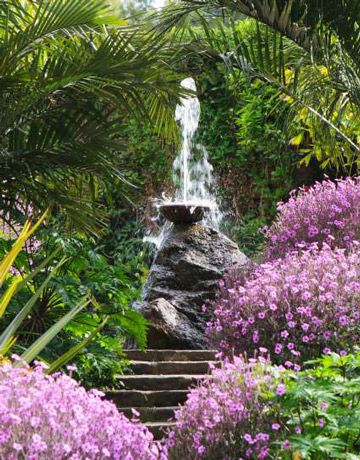 The Waltons came to Ischia shortly after their marriage in 1949. At first they settled in a rental house , but then decided to buy land in the place called Le Mortelle - from the name of the myrtle bushes (Myrtus communis) growing between the rocks. So the property was called La Mortella.

Lady Walton developed the garden for more than 50 years , at the beginning with the help and advice of the English landscape designer Russell Page, subsequently following her own inspiration.

Widowed in 1983, Lady Walton decided to open the garden to the public in 1991 .At the same time she created two foundations, the William Walton Trust in England, and The Fondazione William Walton in Italy , with the aim of promoting the music of her late husband, encouraging the love and knowledge of music, and preserve the gardens .

In 2003, Lady Walton entrusted the task of managing La Mortella to the Italian Foundation , to which later she transferred the whole property. For this reason , the Foundation changed its name to "Fondazione William Walton La Mortella ." By doing so Lady Walton passed the baton and made sure she could follow closely the transition from a privately owned concern, personally managed by herself , to a non-profit cultural organization aimed at the public benefit.

Today La Mortella belongs to Fondazione William Walton La Mortella, that manages the garden, opens it to the public, takes care of the administration , and is in charge of cultural activities.

The Foundation   continues to run the Gardens according to the precise instructions left by Lady Walton , following her enlightened mission and artistic vision, in the name of this great benefactor and in memory of the composer who inspired it. President of the Foundation and director of the garden is dr. Alessandra Vinciguerra , who has been working in La Mortella since 2000 - after having worked professionally in Rome in the field of garden management. She was the right-hand of Lady Walton, and helped her to create the upper garden; in 2003 she was given the responsibility of directing of the garden, with progressively increasing autonomy. When the lady passed away, on March 21, 2010 , the transition was therefore smooth, with no moments of discontinuity or crisis, because the activities continued in accordance with her instructions and her desires, thanks to the dedication of the entire staff coordinated by the administrator Dmitry Tereshchenko.

Today La Mortella is one of the most beautiful private gardens in Europe. In 2004 it received the first prize as ' the most beautiful park in Italy ' by the American firm Briggs & Stratton , and in 2012 was awarded the prize for best maintenance by Great Italian Gardens . This enchanting garden was created in 50 years with artistic sense , love and determination by Lady Walton , who started it to offer the composer a refuge in which to work in peace and isolation . While William composed , Susana created a unique masterpiece , made ​​of flowers and plants, planting tirelessly, giving shape and structure to a rough and unpromising land, propagating and irrigating, and believing in the power of dreams as she created a garden that now houses thousands of rare and exotic plants . To Susana Walton, La Mortella has been the mission of a lifetime, a monument to the life and works of William, and a poignant reminder of the great love they have experienced. The property, which in the early '50s was a sunny and barren land, dotted with volcanic stones, today is a garden in several levels, ranging from a typical sub-tropical in the valley , with its own moist and shady microclimate, to the areas most exposed to the sun on top of the hill.

The house is built on the side of the volcanic hill and includes a concert hall , which is also William Walton Museum , and the Archives. Created in 1990 , the archive includes letters, photographs , manuscripts and memorabilia of Sir William. The archive provides a great resource for both scholars and enthusiasts , and selected pieces of the collection are on permanent display in the museum. The collection is continuously updated whenever additional material comes to light. Just like La Mortella itself, which has grown from a barren rock quarry to a rich tropical garden , the archive has been a labor of love supported by a careful long-term planning .

Two seasons of concerts of chamber music are held in the Museum, in spring and autumn . Every weekend , young musicians sent by Italian and foreign music schools perform a total of more than seventy concerts, open to the public . Annual Masterclass for young singers and musicians were held for 10 years, from 1989. Harvard University held a program of residences for composers for 5 years, and trainees in the field of gardening come here to gain work experience .

Over time, the William Walton Foundation and La Mortella has established great relations with  prestigious music schools such as the Royal Welsh College of Music and Drama , which created a scholarship in the name of William Walton and sends an ensemble of its students to Ischia every year, and the School of Music of Fiesole that also has an annual Walton scholarship for a young musician, and sends its students to Ischia thorughout the year.

The hill garden is dominated by the Greek Theatre, an auditorium carved out of the slope of the mountain, with a stage overlooking the panorama of the Bay of Forio. In this charming theater, opened in 2007, surrounded by Chinese roses and fragrant herbs, are held Concerts of youth orchestras in the summer.