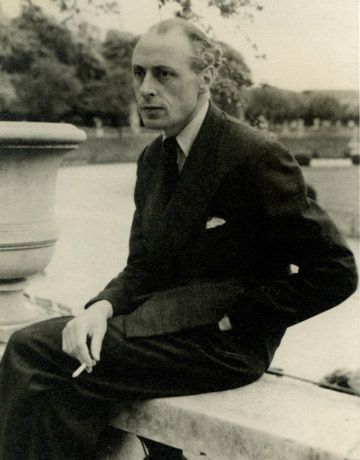 Russell Page (1906-1985) was one of the greatest landscape architects of the 20th century. Born in Lincolnshire in 1906, he devoted himself to gardening from a young age and as an adolescent worked in different gardens during the summer holidays.

He studied at the Slade School of Art, receiving the education as a painter that was to prove so useful in his future, and then transferred to Paris to complete his studies. There he met André de Vilmorin, whose family had been traders in seeds and plants for 200 years, and through collaborations with them began to dedicate himself to gardens.

Back in England, (1932) Page devoted himself completely to garden design, working for a time with Geoffrey Jellicoe another well-known English landscapist, and then following his individual career. Page designed literally hundreds of gardens in England, France, Belgium, Switzerland, Holland, Spain, Italy, South America and the United States. It would be difficult to find in these any common theme, or easily traced style: even if he is perhaps best known for formal and symmetric designs, and trimmed plants, in reality he always adapted his gardens to the place, the character of the building and the environment. There are many influences on his work: he himself admitted to having been inspired by the Hidcote garden which he had known since a boy, and by his travels in the east and by French traditions. His only book, The Education Of A Gardener, is a treasure trove of ideas, information and practical advice which should be read by anyone interested in garden design.

Page arrived at Mortella in 1956, and designed the basic plan of the valley garden. Into this initial scheme he then incorporated the first three fountains and, later still, the new arrangement of the valley with the stream and the octagonal fountain. He was not involved with the hillside garden.